Train Only Reaching Half its Maximum Speed

This sim is a brand new, free game engine built on a Windows XNA foundation. It breathes new life into MSTS content as OpenRails is backwards compatible with MSTS routes, activities, and train sets. It's actively in development and approaching v1.0. Please visit the OpenRails web site for minimum HW specifications and software dependencies. The best way to participate is to ask questions as many members of the OpenRails development team participate in the forums.

Train Only Reaching Half its Maximum Speed

I've recently been downloading several routes and activities geared towards main-line steam-era operations, and for the most part, I've had few problems with any of the sessions that I've run so far.

However, I did recently come across an issue with keeping up with station arrival times for a few activities, and considering the age of the activities, this might be a compatibility issue issue with OpenRails and how it handles engine physics.

The first activity that I noticed this on was Paddington to Swansea (ID: 30572) for the Bristol to Cardiff route, and the engine being used came from the BR King Multipack (ID: 23187). Although the track monitor reads 100 mph, as does the maximum velocity in the .eng file, the engine itself seems to only be capable of 55 mph on level track. I decided to test the same engine (and consist) in explorer mode to see what could have been going wrong, and although everything seemed to be running normally, one thing that caught my eye was a "CritSpeed" variable that happened to read almost half of what the engine was capable of traveling (~27 and ~55 mph respectively). I caught a shot of my run, just in case anyone else notices something else off-putting about these figures: 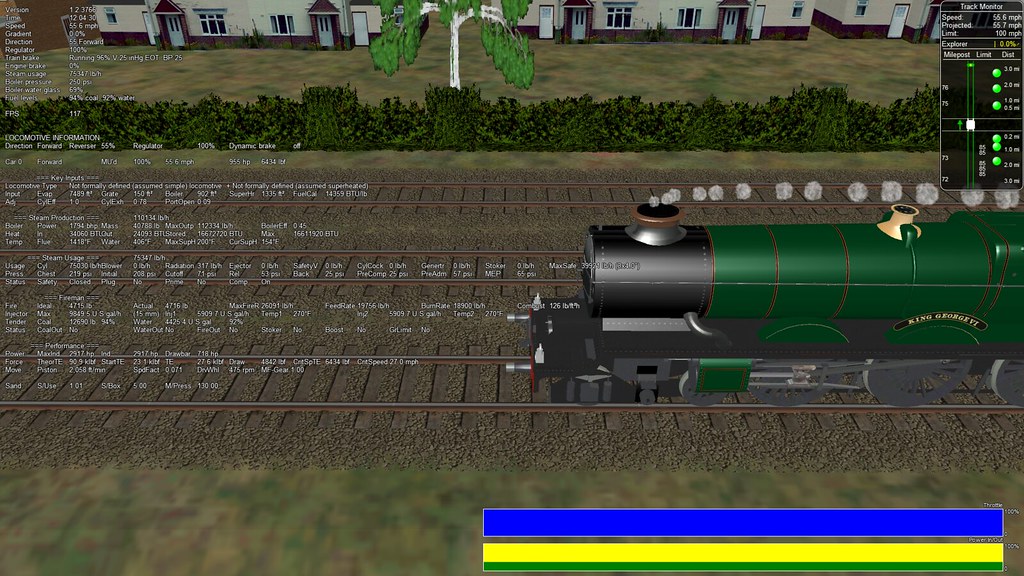 Since I admittedly don't have the patience to try getting this route to run in MSTS (which I haven't done in over a year), I'll just assume that this is a result of OR physics compiling the engine data in a way that changes its performance from how it would be in MSTS. I haven's seen anyone else here mention a similar problem, so I wouldn't expect anyone to have a bullet-proof fix for this. I'm also well aware that an engine that CAN reach 100 mph may NOT actually reach that speed, but it should certainly be able to go faster that 55 mph. In any case, I'm willing to get dirty and adjust some other physics values in the .eng file until I get more satisfying results, but I'd rather save that as a last resort.

Unless . . . this really IS how this engine is supposed to perform?
Top

ThatSolitaryGuy wrote:Unless . . . this really IS how this engine is supposed to perform?

There has recently been a comprehensive review and re-programming of steam physics in Open Rails. This actually uses the parameters for performance quoted in an eng file whereas it was long suspected that either MSTS ignored some or didn't use them properly. It was also the habit of some model makers who didn't really understand the eng file to copy one that "worked" from a different model - even a different engine type so some parameters were completely inappropriate.
Have a look through the eng file and also the OR log which gives a list of parameters that it has assumed or changed to more appropriate values. Check these with a source that gives the real world specifications for the loco and you should be able to work out what needs changing in the eng file.

May I suggest that you try the latest Test Version, X4162, as there have been a great many improvement since that was released, more than a year ago!

slipperman12 wrote:Hi, You seem to be using the last Stable version of Open Rails, 1.2.3766.
May I suggest that you try the latest Test Version, X4162, as there have been a great many improvement since that was released, more than a year ago!
Cheers, Ged

Good idea! I didn't look at the level of OR. The steam improvements are very recent.
It's well worth keeping up to the latest test level of OR; it contains all the latest fixes/developments and very seldom gives any trouble. Even if you do get a problem with the latest version, it's easy to revert to a level you're happy with.

Alright, so I've switched to version X4162, and the results have been more satisfying. The vacuum brakes seem to be more sensitive, and the increase in speed has naturally led to an increase in fuel consumption, but it's still manageable enough. I've generally had reservations about using experimental versions of OR, but given how long it's been since the last official update, I suppose I can hope not to encounter any game-breaking changes in this version.
Top
Locked
5 posts • Page 1 of 1

Return to “[OR] Help for Beginners”